Best Beaches in Belize: What You Should Know about the Seagrass Situation in San Pedro

Our world-travel adventure got off to a rocky start when our idyllic beach paradise of San Pedro, Belize, turned out to have a major environmental problem going on.

We booked our trip to San Pedro on a bit of a whim – a friend tagged me in a blog post about 10 Cheap Places to Live in the World, knowing we were planning our travels, and it listed San Pedro as one such place (we found out after booking our flights that it can be cheap to live here long term, but one month rentals for cheap were harder to find! Oops… we should have done our research before we booked…).

Coupled with a ridiculously good seat sale on Air Canada to Belize (all in, it was under $400 return for each person from Toronto), we booked the trip without doing much research into Ambergris Caye, beyond reading the www.ambergriscaye.com website and falling for their description of “the Caribbean of 30-40 years ago where everyone drives golf carts”.

We also chose to rent an apartment with a full kitchen, forgoing more expensive options that had a pool, since we love the beach anyway and figured we could just walk to and swim at beaches most of the time.

Imagine our surprise when we walked there for the first time and discovered a species of seaweed we’d never heard of: Sargassum, or seagrass, as it’s known colloquially. Free-floating, it washes up on the shore and can create huge piles along the shoreline very quickly.

We were dismayed, as our plans for a month of enjoying swimming at the beach drifted away as quickly as the seagrass was piling up! 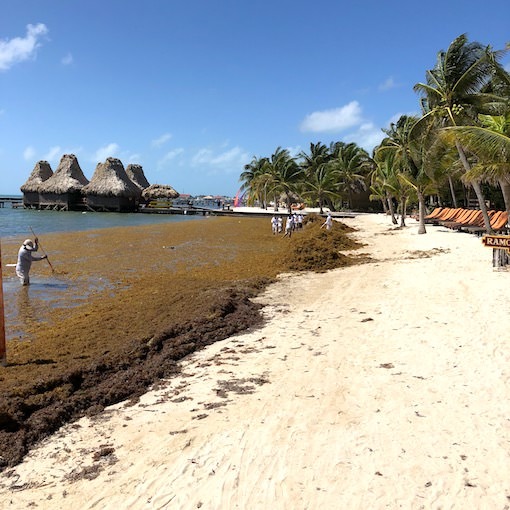 This is what we saw when we went to the beach for the first time. Just imagine: we had planned on a month of beach swimming every day, and we saw this. It was tough! But, luckily, we learned that this was one of the worst seagrass days they’d had in a long time. We also discovered that most days, they cleared the seagrass away by about 10-11am so you could enjoy a day of swimming. By sunset, there would be a little bit built up again, but once you got used to the feel of it and learned it wasn’t dangerous or prickly, it wasn’t such a big deal.

That night, I did some research to find out more (started with Wikipedia, and explored a few other articles from there). Turns out, sargassum used to be mostly contained in the Sargasso Sea, a huge patch of the Atlantic Ocean bounded by four ocean currents and known for its calm waters and floating beds of sargassum. Some of it would drift to the Florida Keys, but it mostly stayed put.

“This change in the seagrass has been caused by two factors: climate change affecting the ocean currents and essentially opening up the Sargasso Sea so the sargassum could float away, and nutriments from fertilizers and city wastewater being dumped into the ocean, and over-feeding the seagrass.”

Starting in 2011, however, and culminating in a serious “sargassum event” in 2015, the seagrass broke free from the Sargasso Sea and drifted mainly into the Caribbean Sea, causing major issues along the shorelines of many countries.

The issue still continues today in many places, although the “crisis” of 2015 has subsided (it’s merely annoying now, whereas there were actually health issues for residents and tourists in 2015, apparently. I hear it comes and goes throughout the year, at times getting worse and rotting a bit).

To be fair to San Pedro and Ambergris Caye, resorts all around the Caribbean Sea continue to be affected by seagrass. When we got to Mexico, we learned that Cancun and Playa del Carmen were still having issues with seagrass, and the stories of its affects would just continue around the Caribbean coast.

It’s a buyer beware situation – the photos of ALL these places look impeccable, mostly because they’re still using photos from before the seagrass started moving in, and/or they have been strategically taken to not show it!

This change in the seagrass movement has been caused by two factors, as far as scientists can determine: climate change affecting the ocean currents and essentially opening up the Sargasso Sea so the sargassum could float away, and nutriments from fertilizers and city wastewater being dumped into the ocean, and over-feeding the seagrass.

Yay, humans! Way to continue to wreck our beautiful world. 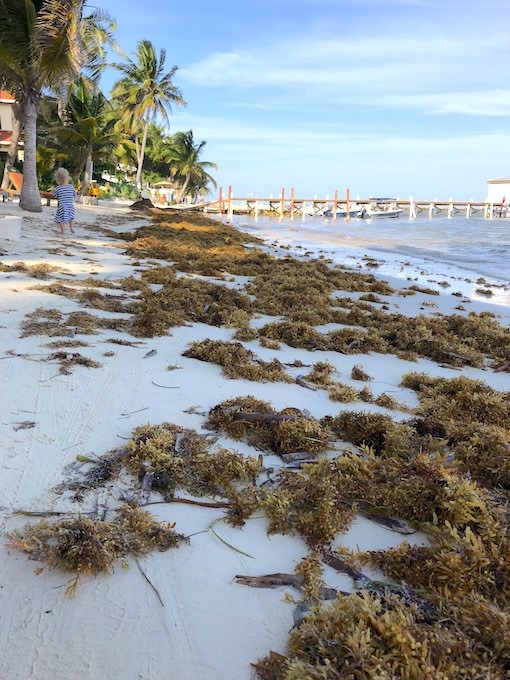 Once the kids were used to it, it barely phased them – they just tramped through it like it wasn’t even there. 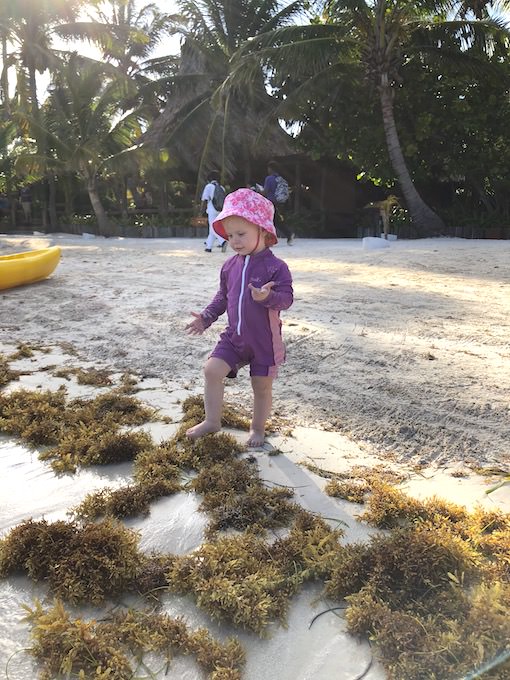 It took a little time, but we ended up finding our spots to enjoy the water, and made sure we didn’t let it wreck our time in San Pedro.

Between Secret Beach, Ramon’s Beach, Billy Bones Pool Bar, and Sandy Toes Beach (see my blog post on the Top 15 Fun Things to do in San Pedro with Young Kids for details on these spots), we made the best of the situation and really enjoyed the gorgeous island and the amazing mix of cultures that is there!

It was a good lesson to start learning as we began our world travel adventure: you can never truly predict or understand a place until you’re there.

We learned this lesson again in Mexico. But this was our first taste of a place not being what we expected, and it took a lot of strong-willed positive thinking to not sink into despair about the seagrass.

By the end of our stay, we didn’t want to leave – and almost skipped our return flight home! Ambergris Caye absolutely captured our hearts, seagrass and all.

Now go listen to the Madonna song “La Isla Bonita”, written about San Pedro, and you’ll get a feeling for what I’m talking about. Every time I listen to it, it really does transport me back and makes me miss the island so much! 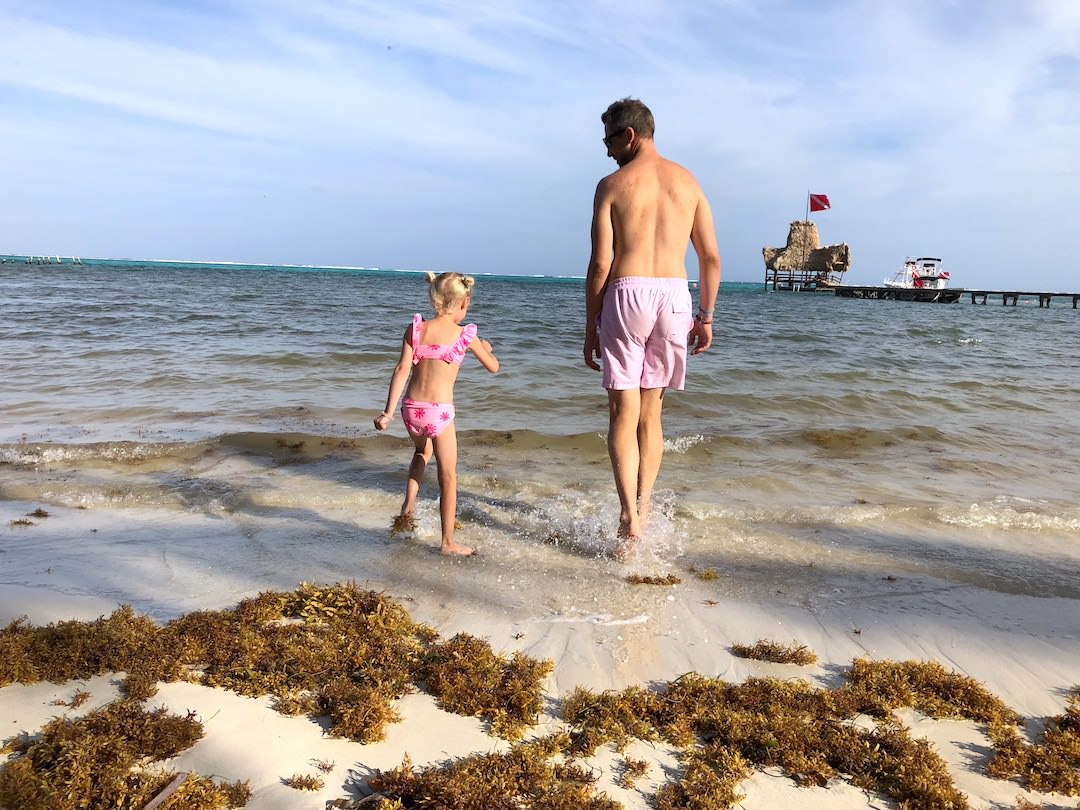 Charlotte would sometimes complain that she didn’t like the beach because of the seagrass, but once we were there, she was a little trooper and would stomp her way past it into the waves with Daddy!

I am a full-time traveling Mum of two adorably blond and mischevious little girls (isn’t it a good thing nature makes babies so damn cute?). I love to explore new places, finding the fun little places for my littles to play, and getting immersed in different cultures. I like to write and share about our travel adventures while keeping it minimalist and vegan as much as possible! Oh, and I love yoga, ballet, reading, baking, and time with friends.