So Long, and Thanks for All the Sickness

Sickness. So much sickness. 18 separate things in 7 weeks for 4 people. Plus a teething toddler. Life on this paradise island wasn’t exactly paradise for us!

I’ve barely written anything since arriving on Isla Mujeres almost two months ago. There are many things that got in the way – trying to get my actual blog site created, giving my husband the bulk of the productive work time so he can start earning an income, committing to yoga every day (well, almost every day…), trying to get a handle on the organization of our photos, and so on and so on. Oh yeah, and keeping two young girls alive and active and entertained.

But the biggest thing that impacted our stay here, on this beautiful island on the gorgeous Riviera Maya in Quintana Roo, Mexico, was sickness. And injury. And horribly infectious rashes. 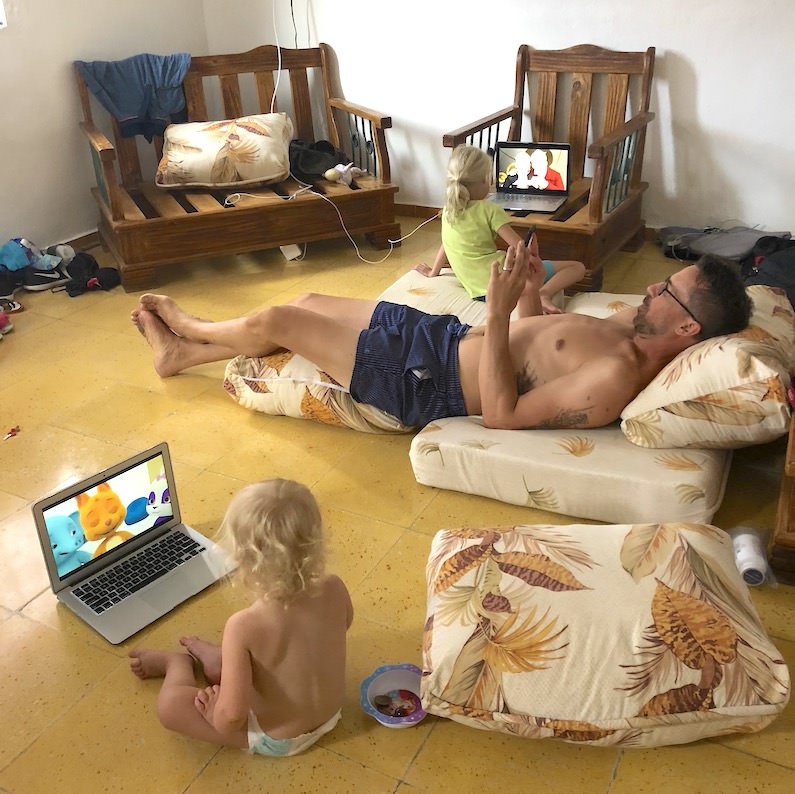 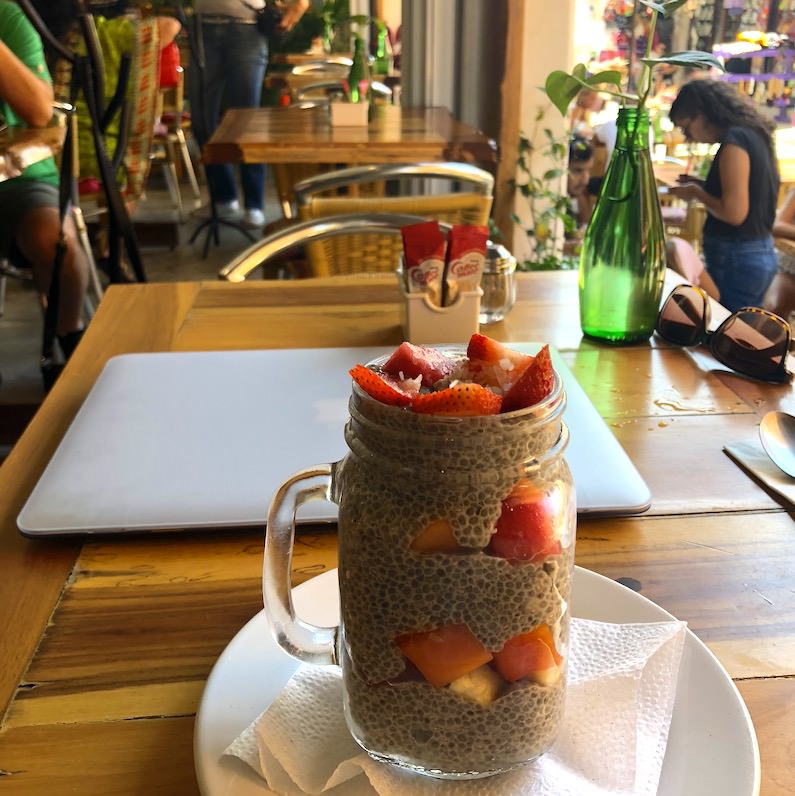 Coping with solo parenting for days on end in a brand new location – while also trying to take care of my poor sick husband – occasionally meant leaving the kids and husband to their own devices (literally…) and spending an hour or two on my own.

This first time, I escaped to Aroma Isla, my favourite vegetarian/vegan restaurant on Isla Mujeres.

Their chia pudding is delicious, and the coconut vanilla vegan ice cream is the best I’ve ever had!

In the past seven weeks, we have had the following afflict our family:

Oh, yeah, and a toddler teething 3 incisors at one time and a five year old who got her first loose tooth.

All of this included 2 hospital trips, 2 doctor office trips, 4 dentist trips, and 4 house calls by the doctor.

“But this is real life. Not vacation. And I’m grateful that it didn’t happen on some two-week vacation, where that’s all the time we have – that would REALLY suck!”

That’s 18 separate things. In 7 weeks. For 4 people. We have never been this sick in our lives! It’s hard to not blame Mexico, even though that’s totally irrational (it makes me sing “Blame Canada” from South Park in my head!).

We’ve traveled in hot climates before without this level of illness. Is it just bad luck? Or is there something here that just doesn’t agree with us? The water, something in the air? Only time will tell – we will have to see if this continues as we travel to new locations.

Thank goodness for Mexican health care, though! They still do house calls and it was amazing! After a night of intense pain and throwing up with my dehydration, Jonathan called the doctor. Dr. Salas came at 10am on a Sunday morning for a house call check up. Within an hour, Eric the nurse had come and I was set up with an IV drip. I felt better within the hour, and spent the day recovering in bed (that part wasn’t so bad… a day, resting by myself, binge watching The Crown on Netflix? I wouldn’t mind going through that again!)

Two days later, when Jonathan’s fever was spiking and his abdominal pain was intensifying at 11:30pm on a Saturday night, our landlord and neighbour called Eric the nurse, who also happened to be his childhood friend, and Eric was at our house within 20 minutes. This incident first involved me heading down to the main road to hail a taxi to take Jonathan to the hospital, and our neighbour and landlord, Jorge, coming by on his scooter to collect me and bring me home, as he’d already called Eric.

These house calls were SO much easier and better than dragging ourselves to a hospital. Or, me being me, toughing it out for way longer than I should because I don’t want to leave the house or look silly for showing up at the hospital over nothing. 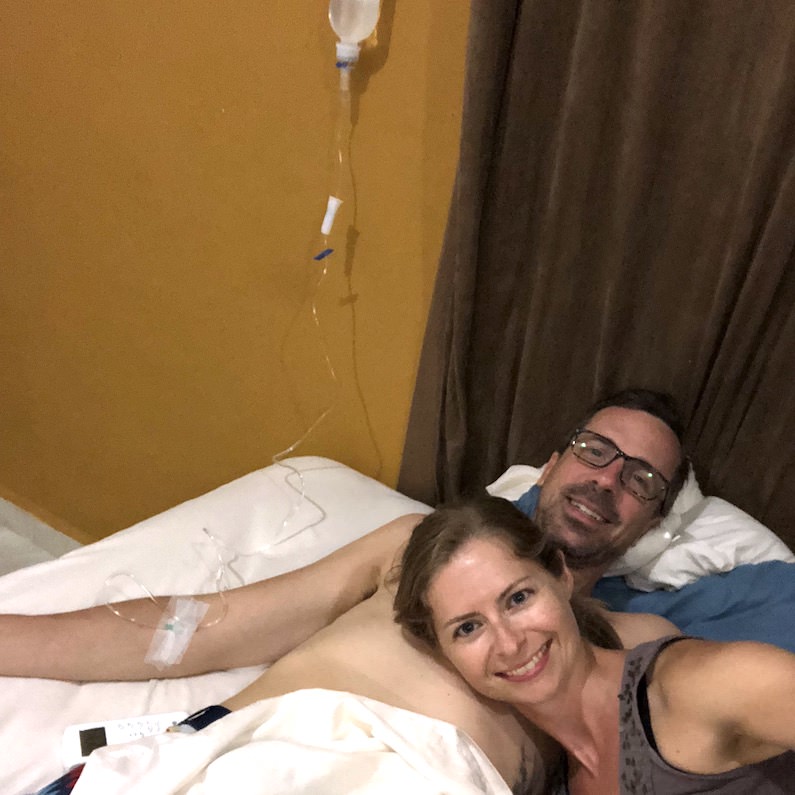 Jonathan’s house call IV drip – we unfortunately missed getting a photo of mine, two days prior, in exactly the same spot!

It has unfortunately cast a pall over our time here on Isla Mujeres. The island isn’t perfect, and hasn’t been everything we wanted it to be – I will write a post soon about the pros and cons of the island. But we agree that it would have been a lot easier to make the most of it, flaws and all, if we weren’t constantly battling sickness!

It meant that multiple fun family days on the weekends had to be cancelled or amended. It meant that I had to solo parent for days on end as Jonathan laid in bed with a fever (including moving from one Airbnb to another). It meant multiple days of keeping the girls home and losing a lot of productive work time. It meant way more TV time than I like.

But this is real life. Not vacation. And I’m grateful that it didn’t happen on some two-week vacation, where that’s all the time we have – that would REALLY suck!

For us, we can always go to the beach again tomorrow… or next week. We don’t have important day jobs we had to miss to stay home and take care of our kids. No one got anything really serious (although the herpes mis-diagnosis sure had us freaking out for a few days).

Amongst all this sickness, we did still have some wonderful times, met some lovely people, and got to enjoy Playa Norte, one of the best beaches in the world (literally).

We’re all okay, and hoping that the next stop along our travels brings a little more fun and a little sickness.

(note: this blog post was written on June 7 but not published until August 7… Mexico wasn’t exactly as productive as we’d hoped it would be!)