The first week of our full-time traveling lifestyle took us to the island of Ambergris Caye and the town of San Pedro, in Belize. It brought a lot of highs and lows, including starting a new school, loving our golf cart, discovering the seaweed, and meeting new friends.
We have had a great first week in San Pedro. Some tough moments as we dealt with learning a new place and how to have fun despite the seagrass issue (see my post on the Sargassum situation in San Pedro), but we’re now bee-bopping around town in our golf cart like a local, chuckling at the newbies going the wrong way on the very poorly marked one way streets. 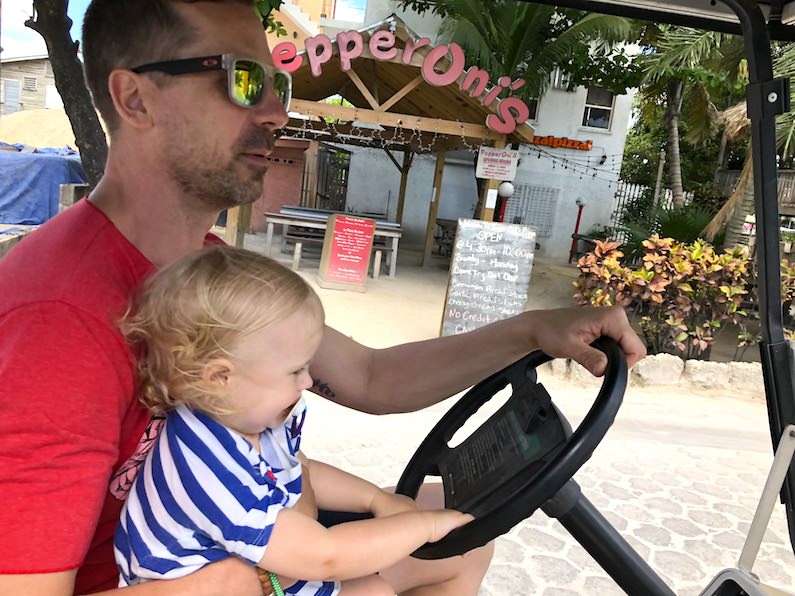 Everyone loved the golf cart. It was the perfect way to get around: all the fun and ease of a scooter-like vehicle (hop on and off, no seat belts or car seats, open air) without the serious danger of crashes!

I think it might also have ignited Aria’s passion for transportation of all kinds: boats, buses, bicycles, airplanes, trains – she loves them all!

Charlotte is in the Isla Bonita elementary school, where she gets her own little old fashioned chair/desk, there is lunch served with fruit punch every day, and there is a candy store. Who could ask for anything more?!

It’s not really a religious school – not like the Roman Catholic school that is actually the public school here – but she still woke me up yesterday talking about the place where Grampy and Great Grandma are, way up above the moon, called  “Kohrahbin” and it took my tired brain a few minutes to realize she was saying “God in Heaven” as she would hear it from a Spanish accent, quickly spoken to a kid who’s never heard of God or Heaven!

I tried to explain that it’s a part of one religion, and different people believe different things, and that it’s just a story, but she just kept saying “no, it’s true, Mummy!” Explaining religion is going to be a challenge for this literal, black-and-white kid!

She is one of only two white kids in the whole school, which is a pretty eye-opening experience for her  – the kids were asking me why she has white hair. Everyone at the school is very friendly!

“UPDATE: Charlotte only attended Isla Bonita for four days. I think that’s a record, even for a Kenzie!”
We have found an incredible beach, called Secret Beach (you can read more about it here), but it’s an hour’s drive on some of the worst roads I’ve ever been on, so it won’t be an every day thing.

However, we did find a fantastic pool today that’s close to our house and cheap to access (Billy Bones Pool Bar) , so that was exciting given that the seagrass issue makes most of the beaches near us un-swimmable.

We have made some delicious vegan Mexican/Belizean food – rice and beans, tortillas, guacamole from the best avocados we’ve ever had. And lots of fresh smoothies! Really enjoying our huge two bedroom apartment and cooking all our meals. Aria is a nightmare in restaurants right now, so it works out well! We have nightly dance parties or water bottle bowling games in the huge main living area. 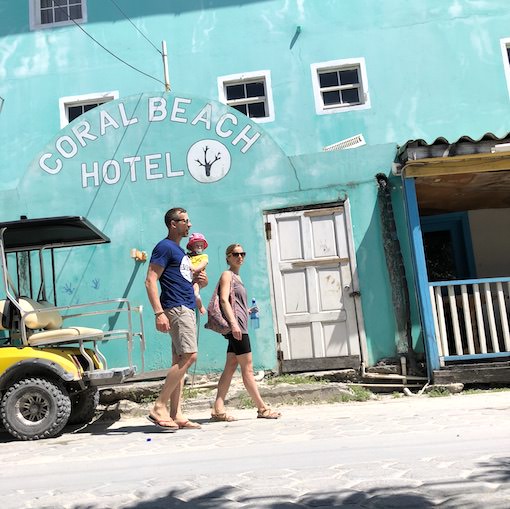 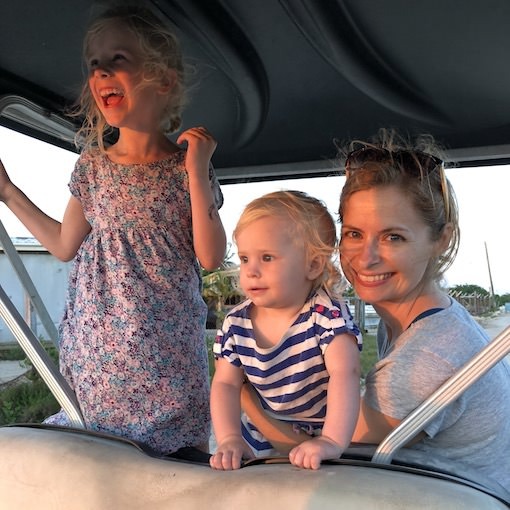 One of the few days where Charlotte was at school and it was just us three – such a rare event!
More fun times on the golf cart: finally getting to watch the beautiful sunset!

We met a lovely family on Sunday who own a triplex house here that they’re fixing up to sell. They unfortunately left yesterday, which was sad as we got along great and Charlotte and their 3.5 year old girl were instant friends and played SO well together. They also have a nine month old girl, own several rental properties around the world, and are currently living in Colorado (where husband is from) but head back to Australia this fall (where wife is from) and don’t have “real” jobs – so we had lots in common!

We also met a lovely local family – the nine year old girl and Charlotte played for hours at the beach the other day and again at the pool today. She was also helping teach me some Spanish – I’m trying to pick up a few basic phrases while I’m here! Everyone speaks English as well, so it’s harder to practice, but I’m hearing and seeing it everywhere, so that helps.

Anyway, can’t believe we already only have three weeks left! This place has definitely captured our hearts already.

UPDATE from 4 days later: Charlotte only attended Isla Bonita for four days. I think that’s a record, even for a Kenzie! (for more info on my family’s unorthodox approach to education, check out my rambling blog post on worldschooling that delves into our various experiences with public school, homeschooling, and Waldorf School).

It was just too old school, with too much sitting at desks all day. Their approach to discipline was also a bit much for my sensitive, literal little girl. At one point, the teacher apparently told the class that she would throw fire ants on them if they didn’t sit down and be quiet! That one made poor Charlotte cry – she’s not used to people saying things like that, and thought her teacher was completely serious (which sounds exactly like me at that age).

At another point, the teacher threatened that she was going to call the police and put them all in jail. The other kids just laugh it off – it is very obvious that it is just part of the humour and discipline in their culture. So I had to explain all of that to Charlotte, but I don’t think she was 100% convinced.

So, instead of school, we’ve had fun days meeting other kids, “playing” school, and swimming. We LOVE it here and wish we could stay a few more months.

It’s definitely a big learning curve, though, as we figure out how to do this whole we’re-not-on-vacation, this-is-daily-life thing. Sending Charlotte to school at least gave us some structure to our days – and, let’s be honest, a 50% break from parenting. Without school or work, we’re slowly figuring how to impose and implement some structure and routine to our days so that we can a) be productive and b) not go crazy. I’ll have a blog post written about this struggle very soon!