Saying goodbye to Isla Mujeres was harder than expected, but we are excited to be on our journey to Vietnam and back to South East Asia, where this whole crazy adventure really began!

So, we left Isla Mujeres – and it was such a whirlwind, I’ve barely processed it. We knew we were going to leave by July 3rd at the latest, and were planning on taking a flight to Vietnam on June 28th, but we kept procrastinating on actually booking our flights (who us? Procrastinate and not make up our minds about where to go until the last minute?! Never!).

There were a lot of factors that went into our procrastination!

But the result was, we quite literally dropped Jonathan’s Mum off at the ferry on Monday at lunch time, came home, got Aria down for a nap and Charlotte settled playing with her neighbourhood friend, and between the hours of 2-4pm, decided that we should leave the NEXT DAY!

We would spend 2 days in Houston, Texas, then fly Qatar Airlines through Doha, Qatar to Ho Chi Minh, Vietnam.

So, over the course of two hours, we: 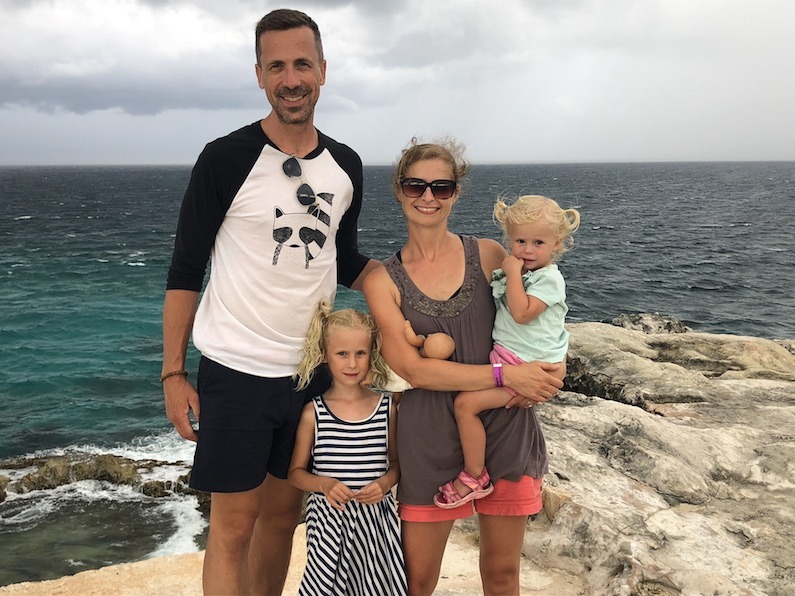 Punta Sur, just a few minutes before those storm clouds in the distance were suddenly upon us!

That turned out to be a blessing in disguise, though, because as we headed back to Punta Sur, the angry-looking storm clouds that had been gathering on the horizon were suddenly almost upon us, clearly bringing heavy rain very soon.

My family indulged me, though, and still finished the Punta Sur walk we hadn’t completed earlier in the week so we could see the Mayan ruins. We got awesome photos with the storm almost upon us, and could feel the rain on our backs as we high-tailed it back to our golf cart! The drive home was epic – we got soaked, and drove through curb-high floods, and laughed and splashed and had a great time!

So, we just ended up at home, drying off and cooking up the last odds and ends of our food while we started packing.

“I will miss a lot of things about Isla – the friends we made, the beaches, the lagoon, our ocean walks, our favourite restaurants and cafes, the friendly neighbours on our street, the friends Charlotte made despite not speaking the same language.”

Thank god for minimalist packing, as the kids were too excited to sleep! Charlotte finally fell asleep at 9pm, but Aria was up until after 10pm – she was packing her bag, getting dressed and ready, and insisting on going out the door to the “bow! bow! bow!” (her way of saying “boat” – her two favourite things right now are boats and bows, so context is very important in our conversations with her).

Despite the unexpectedly late start, I still had everything packed and finished by 12 midnight. I missed my usual photo session, documenting our minimalist packing methods, so now I have to do it before we leave Houston, but it meant that I got a decent night’s sleep!

This morning, we did our final pack, ate up the last of the food for breakfast, and stopped by the girls’ preschool to let them know we were leaving – we hadn’t even had a chance to tell them we weren’t going to be there in July. It was so sad – their teacher, Marisa, was crying, but happy and excited for us at the same time. It really was a lovely place we had for them! 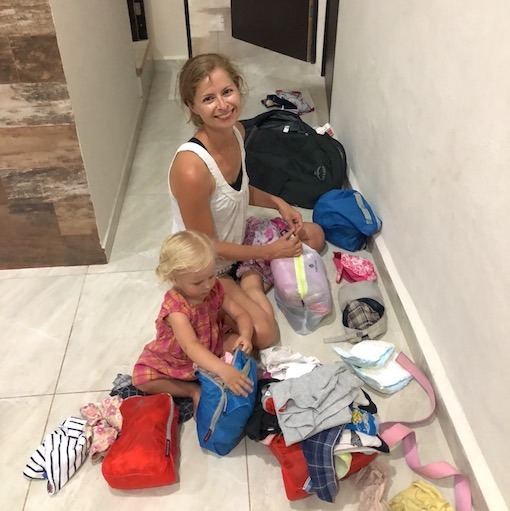 I have the cutest (and least efficient) packing assistant in the world. 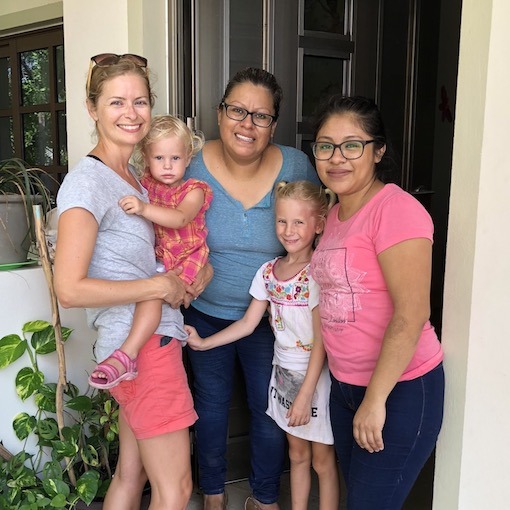 Saying goodbye to Marisa and Areli was so hard! Marisa is making a good effort to smile here, but she was almost crying too hard to manage it.

I will miss a lot of things about Isla – the friends we made, the beaches, the lagoon, our ocean walks, our favourite restaurants and cafes, the friendly neighbours on our street, the friends Charlotte made despite not speaking the same language.

However, it definitely wasn’t the right fit for us overall, and Jonathan is very glad to be moving on. We didn’t quite find the community we were hoping for (despite meeting some lovely people and making a few friends that I hope will be long-time fellow-traveling-family friends), and the internet was really difficult – very slow at times, and unpredictable. It really affected our productivity, as the only way we could guarantee a productive work time was to go into Centro and work at a cafe. We know that there is better internet you can order, but once we knew we weren’t staying long-term, it wasn’t worth ordering for the few weeks we had left.

And it was heartening to see how excited the girls were to get their backpacks back on, and head off on our next adventure. This is the first time it’s felt like we’re a real full-time traveling family – going from one travel destination to another without going “home” first – and it will be interesting to see how the girls react and adjust. But, based on their attitudes so far, I think it will go well! 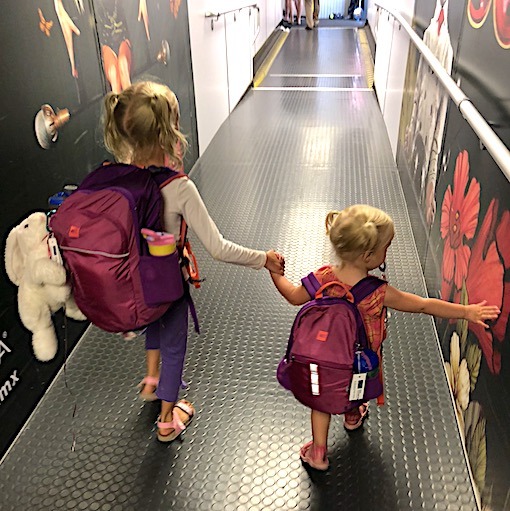 We arrived in Houston and ordered an Uber to our hotel. We got a driver who spoke very little English but was from Cuba, so we happily chatted away in our limited Spanish and his limited English – it was fun to see that even just two months in Mexico has given us a very small base of Spanish to use!

As we drove past downtown, and saw all the beautiful, high-rise hotels, Charlotte asked “Mummy, are we staying at the top of one of those hotels?!” I had to break the news to her that no, unfortunately, our current income stream does not give us the budget for a fancy downtown high rise hotel.

Charlotte has been watching a lot of videos by the Bucket List Family lately, and while they are inspirational and amazing, they have given her a bit of a high standard for what to expect in a travel adventure!

Now, I prefer that over the Youtube videos she had been watching before that. We use Youtube sparingly, but when we did use it, she had been watching these horrid Baby Alive videos, where little girls get all these new dolls and doll accessories, and the video is all about them getting them, and opening them, and playing with them, or taking them shopping – all about getting STUFF, and BUYING stuff!

So I decided that if we were going to let her watch Youtube once in a while, I wanted it to be something that would at least be in line with our minimalist travel lifestyle, not something making her just want to buy more crap and have more toys. And it’s worked! Now, instead of asking for a new Baby Alive doll or the latest Elsa and Anna playhouse, she’s asking when we’re going to Dubai, and can we stay at the Four Seasons hotel in Tokyo, and when can we go surfing in Costa Rica! 🙂

However, after Mexico, we really didn’t need a five-star hotel to give us a feeling of luxury and comfort. Here are the things that were really exciting to us:

It didn’t take a fancy hotel to give us those things. Our cosy little budget inn was just enough. And tomorrow morning, I know the basic continental breakfast will still be exciting to the girls, and I love me a basic breakfast of toast and tea.

And, I have to admit, we had a supremely satisfying and delicious dinner at the Olive Garden. Make-your-own-pasta with marinara sauce and garden veggies with unlimited salad and breadsticks kept it mostly vegan (we know there is probably butter in those breadsticks, but we decided not to ask and just enjoy for one night), and the girls liked the Minestrone Soup and French fries.

Not our usual style, no – not a trendy, independent little restaurant that’s hip and vegan or ethnic and authentic. But today, after the difficulties of the past two months and the stress of the past 24 hours of last-minute travel planning and packing, it was exactly what everyone needed.

Right down to the impeccable Southern hospitality and service (“yes ma’am, of course ma’am, ya’ll enjoy it now”) where we could explain exactly what we wanted and needed (dressing on the side, no cheese on the pasta, an iced tea for the two girls to split – oh, you’ll put it in two separate kid’s cups without us even asking?? Yes, thank you!) without struggling through the language or cultural divide… well, it was a welcome little break.

In two days, we will be right back in there, heading to Vietnam where the language and cultural barrier will be even more extreme, and we will love it and thrive on it and welcome it!

And one day, we hope to be making enough money to splurge on things like fancy hotels in funky neighbourhoods.

But, for tonight… America’s Best Value Inn and Olive Garden are just what the doctor ordered.

Note: this post was written on June 26, approximately 30 hours after making the decision to leave Isla the next day!